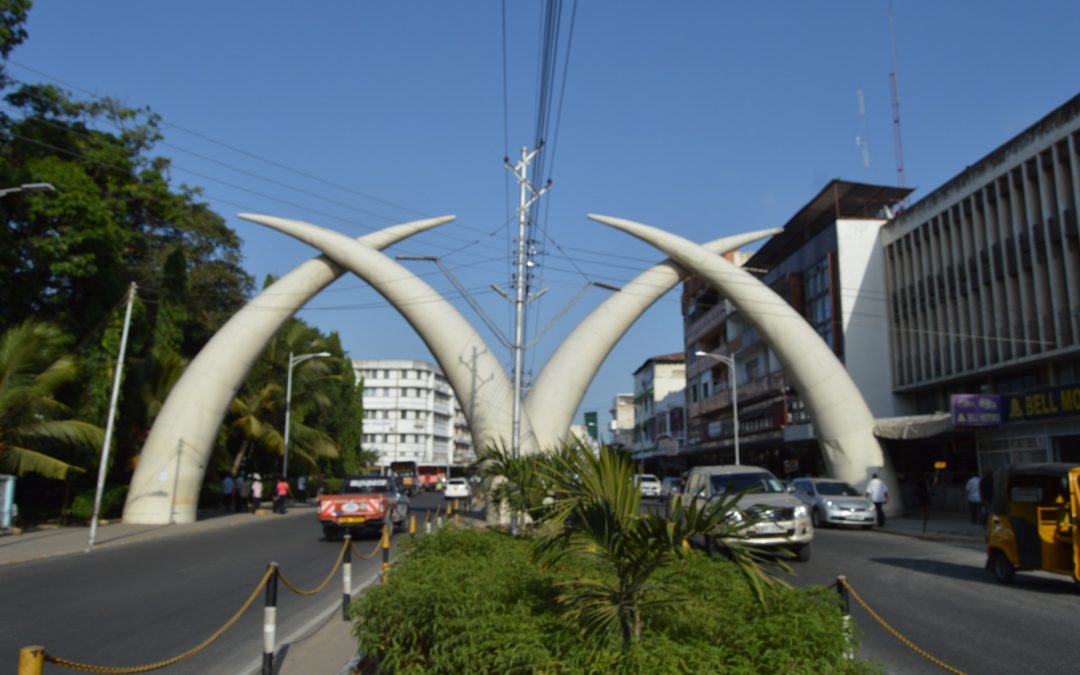 As our time in Nairobi came to an end, it would have been wise to stay in for the evening and prepare for the next morning right? Yes, but this was Nairobi, and if you thought New Yorkers could go all night, take a trip to Kenya! After a night out with the locals, I went back to the apartment after 2 a.m. and finished packing my things. I knew I could probably catch a quick hour or so nap before our driver Patrick would be outside waiting. Before I could even lay down he was texting to say he was downstairs. We headed out and were off to catch the flight to Mombasa. 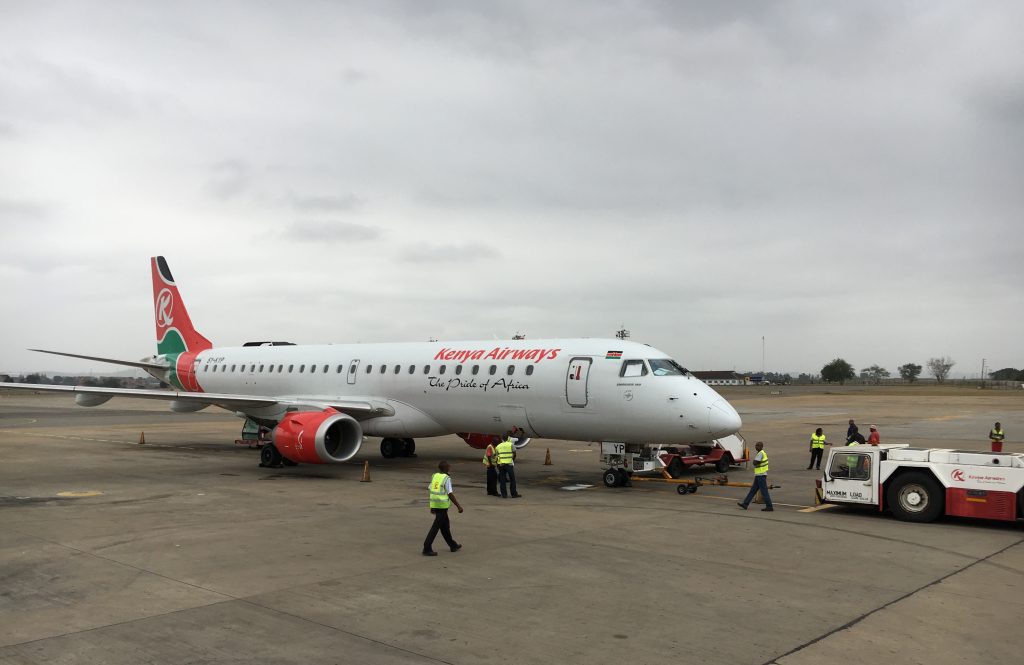 Walking off of the plane the first thing I noticed was the difference in the temperature. While Nairobi had been comfortable and warm, Mombasa was HOT! We grabbed our bags and were greeted by our driver, Frank who would be taking us to our Airbnb at the Lighthouse Villa. As soon as we got in the car, for some reason I just knew that the ride would be interesting. We zoomed out of the airport parking lot and were on our way. Meanwhile, Frank was on his phone going ballistic in Swahili to someone and we just took it all in. Suddenly we felt the car slamming on brakes as a driver in a van cut us off and knocked Frank’s headlight off in the process. Great! We sat in the car while Frank and the guy fussed, talked things out, laughed and eventually went about their business. We made a U-turn and continued.

Frank was driving like a maniac and was soon spotted by one of the local policemen on foot patrol who signaled him to pull over because of his headlight. Frank being Frank decided to elude the officer and speed off. In the midst of this, a biker found himself between us and a van. I covered my eyes as soon as I realized what was about to happen. Yep, another accident. By then I was ready to get out of the car and walk! Frank went missing for a few minutes which seemed like hours and eventually came back to the car saying “Okay, we are good to go now!” I was honestly amazed that he hadn’t been arrested and quickly taken to the nearest jail cell. Nonetheless we eventually arrived at our home for the next two days and checked in with our hosts. From the looks of things, we would be in for a comfortable, welcoming stay. 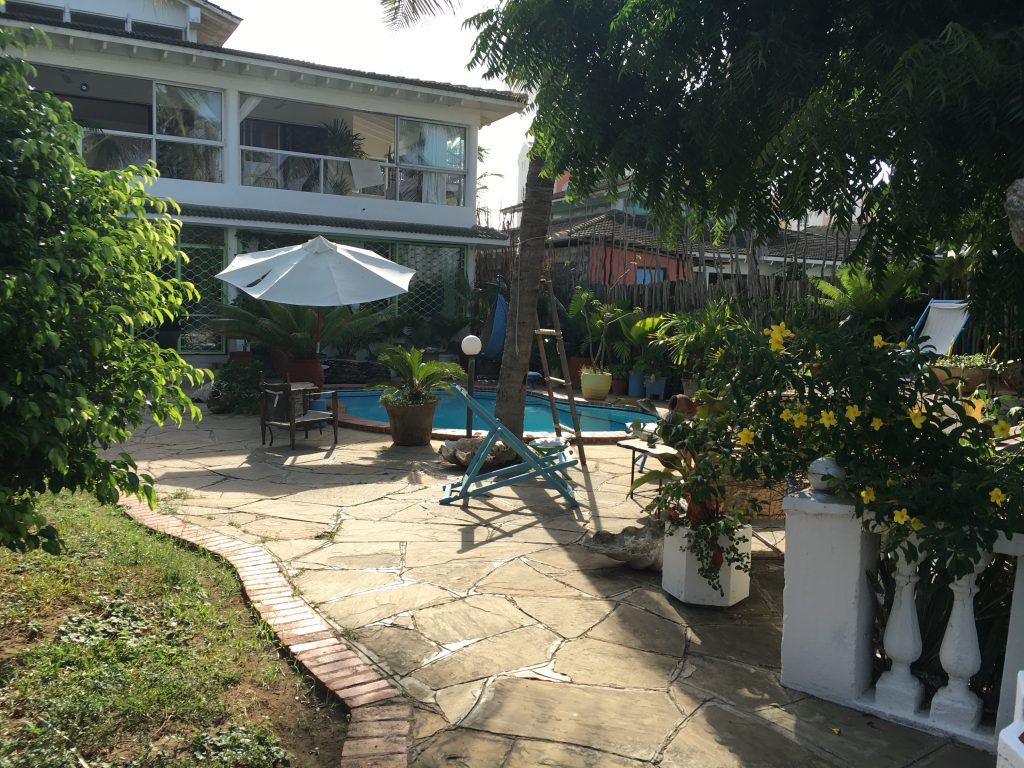 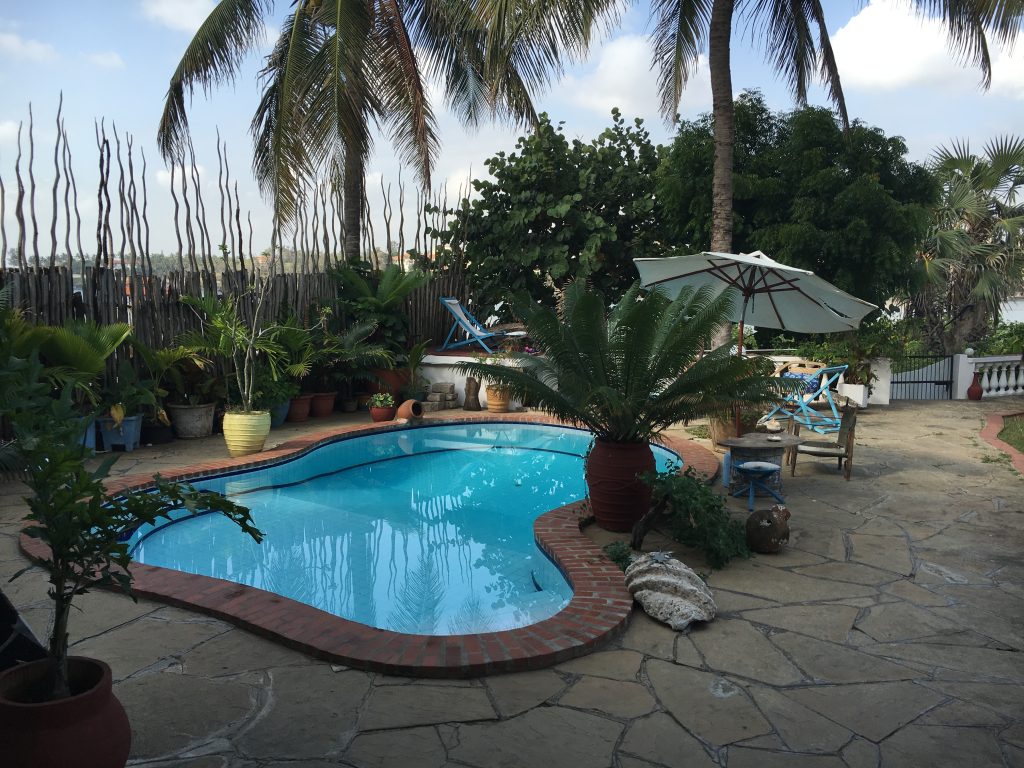 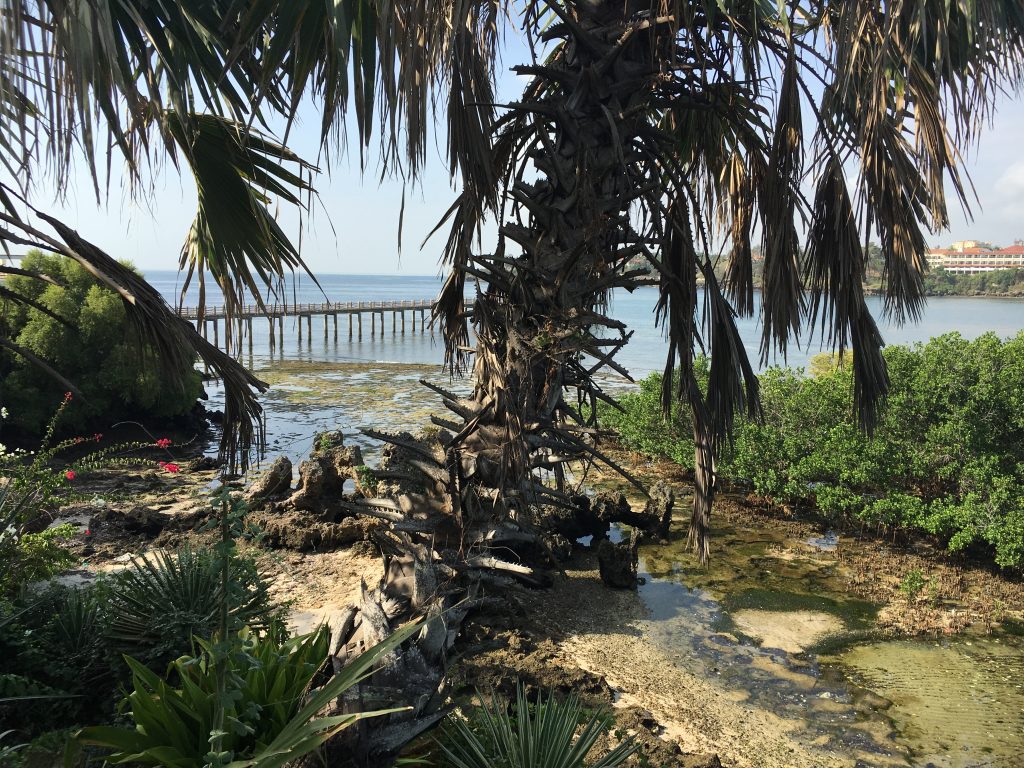 After getting settled in, our host was nice enough to call a friend named Modi and set us up for a tour of Old Town Mombasa which was a short ride across the creek. Modi arrived and we walked down to our luxury yacht to head over. 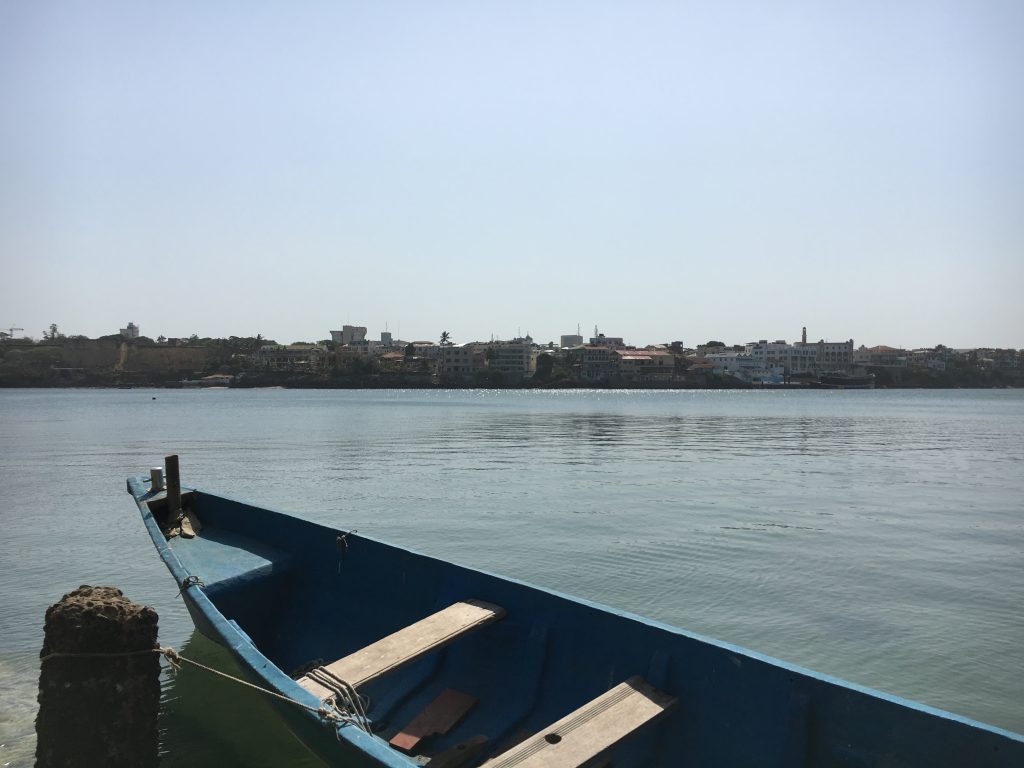 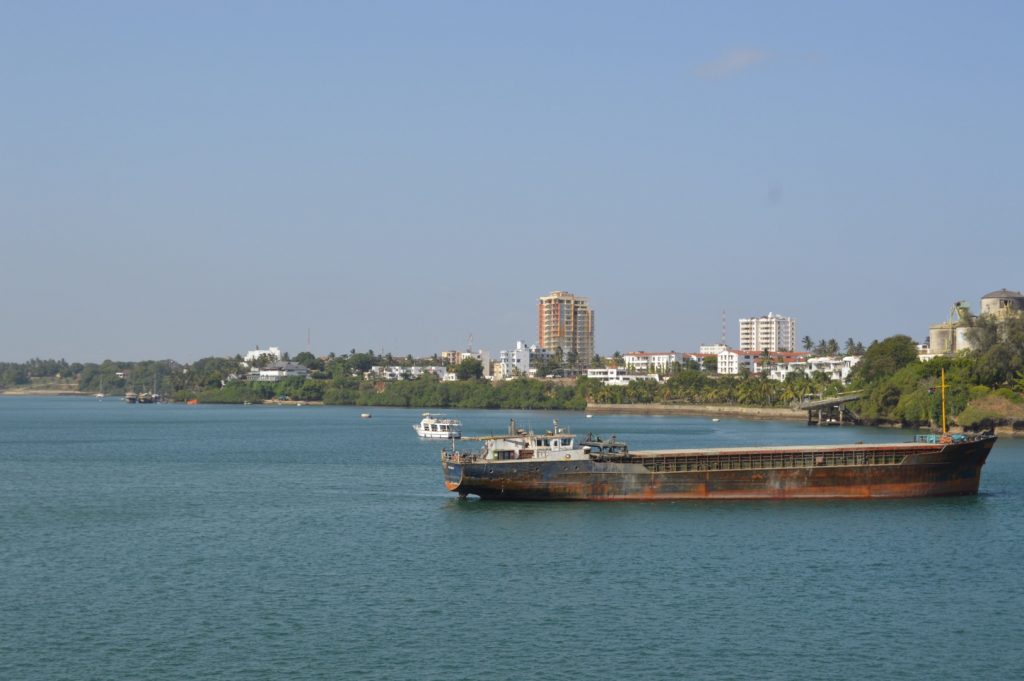 Upon arriving in Old Town, the first thing we noticed were the buildings and their obvious Portuguese and Islamic architecture. Some of the highlights of the next few hours included seeing Fort Jesus, a Portuguese fort built to protect the Old Port of Mombasa; the old Fish Market; the countless street vendors hustling everything from Hollister brand jeans to spices and the Elephant Tusks which were built to commemorate Queen Elizabeth’s visit in 1952. 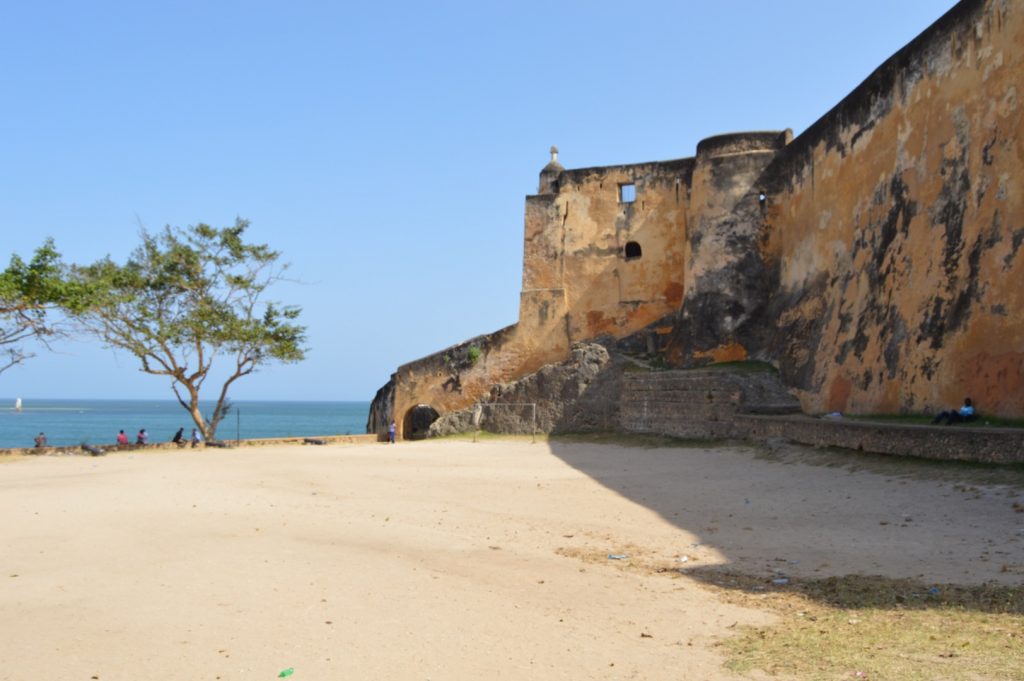 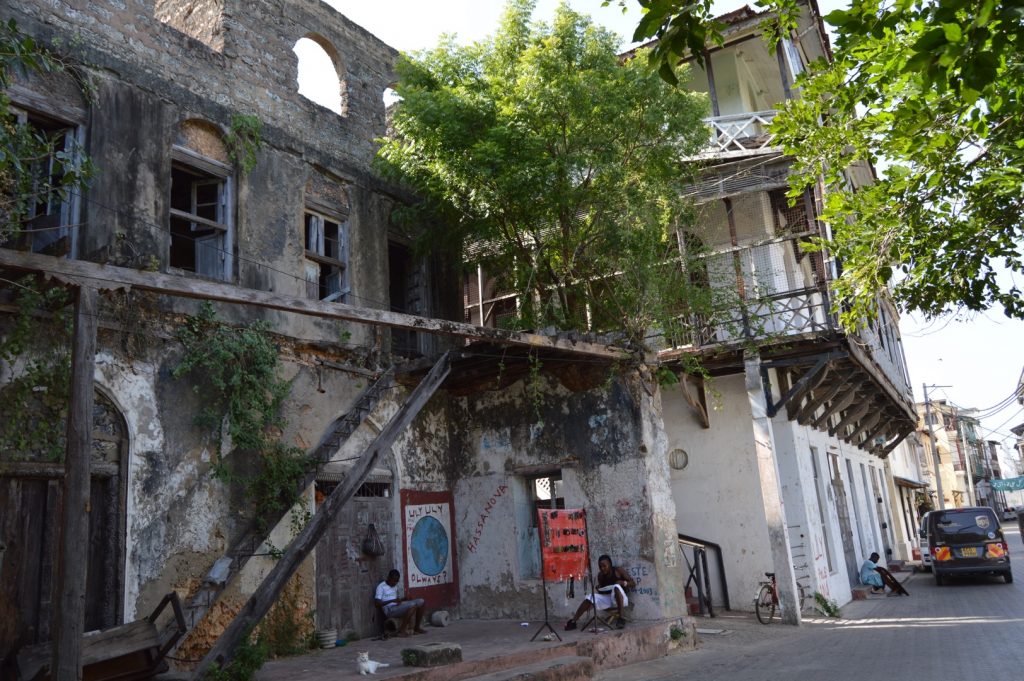 The streets of Old Town 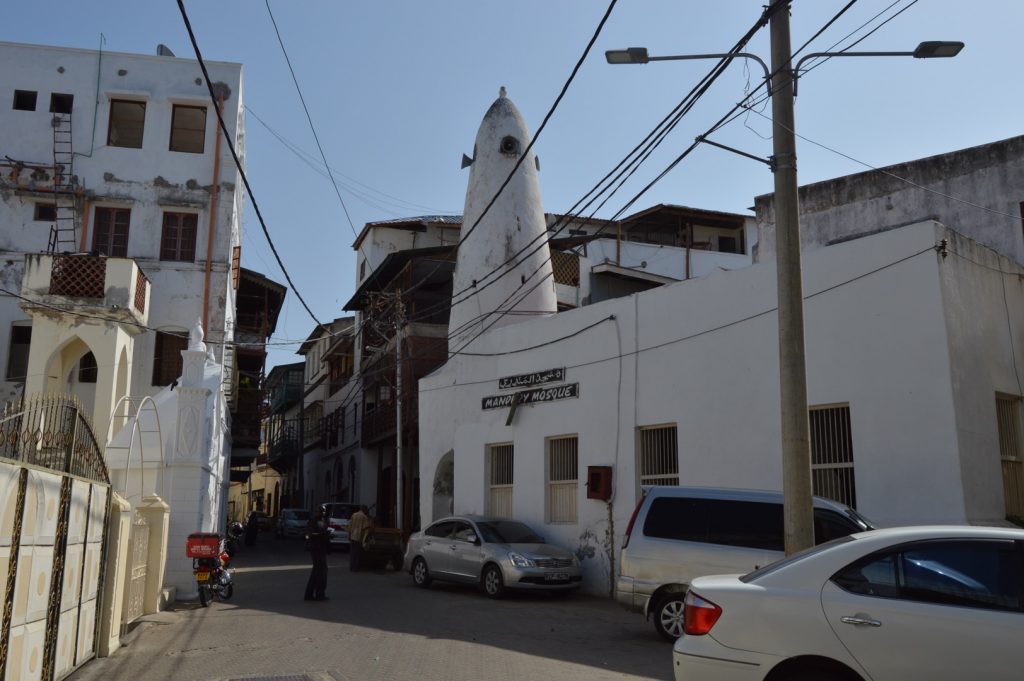 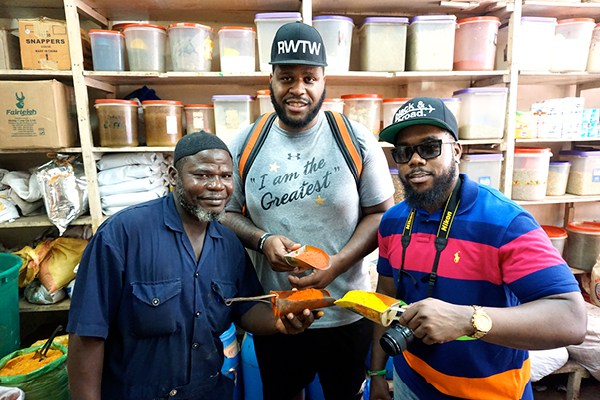 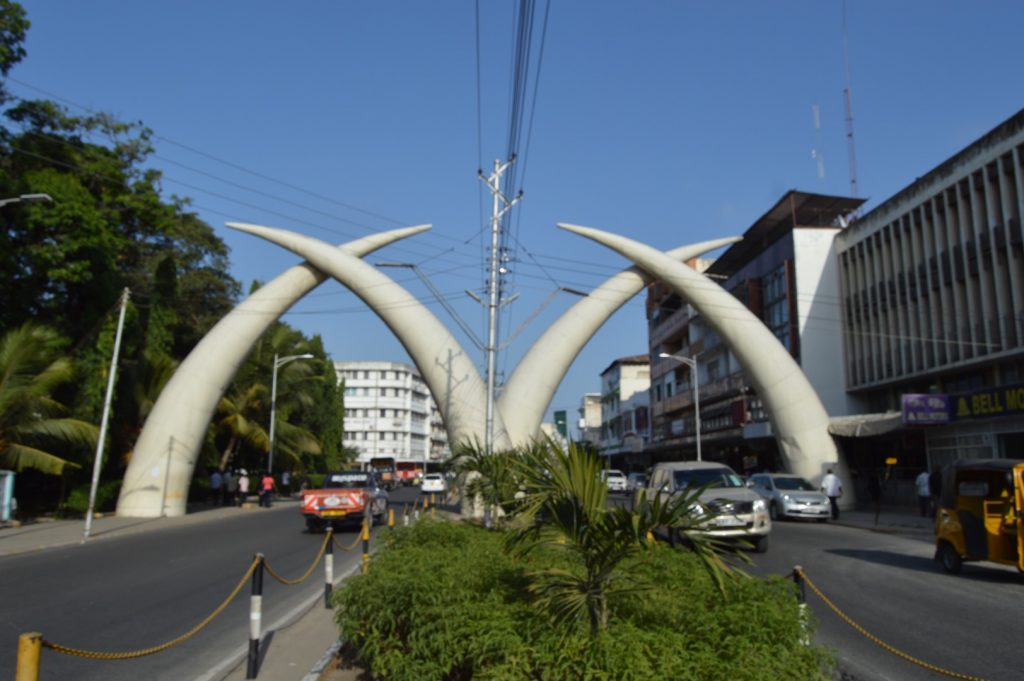 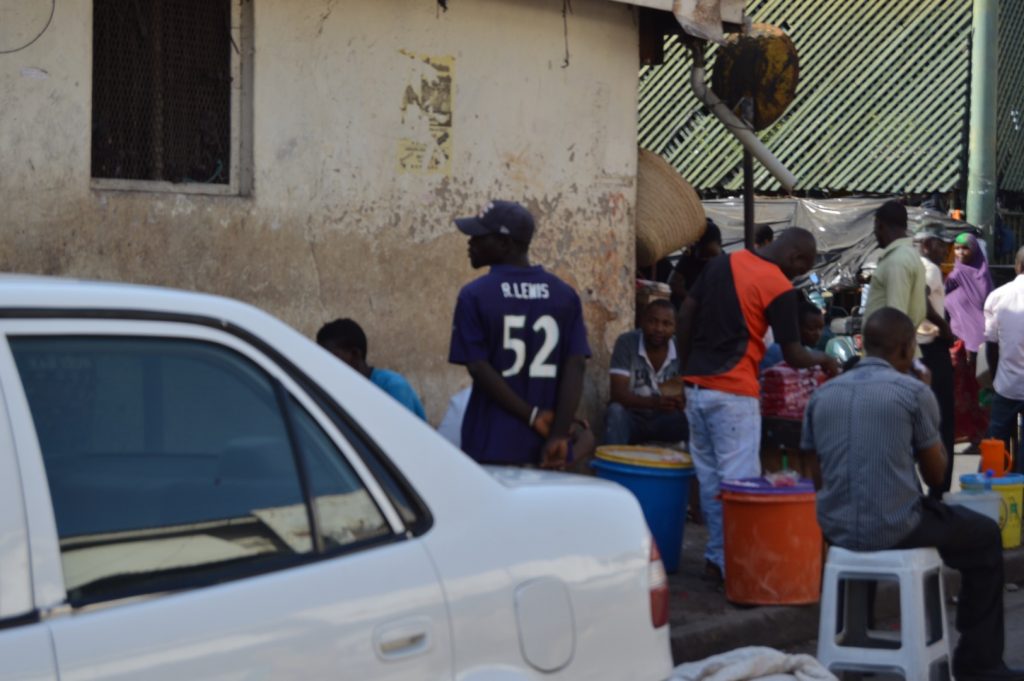 THIS guy gets it! Wearing the Ray Lewis Ravens jersey all the way in Mombasa!

At the conclusion of our tour, we boarded our luxury yacht (lol) once again and were taken to Tamarind, a restaurant overlooking the water which was highly recommended for it’s great food and drinks accompanied by an amazing view of the sunset. 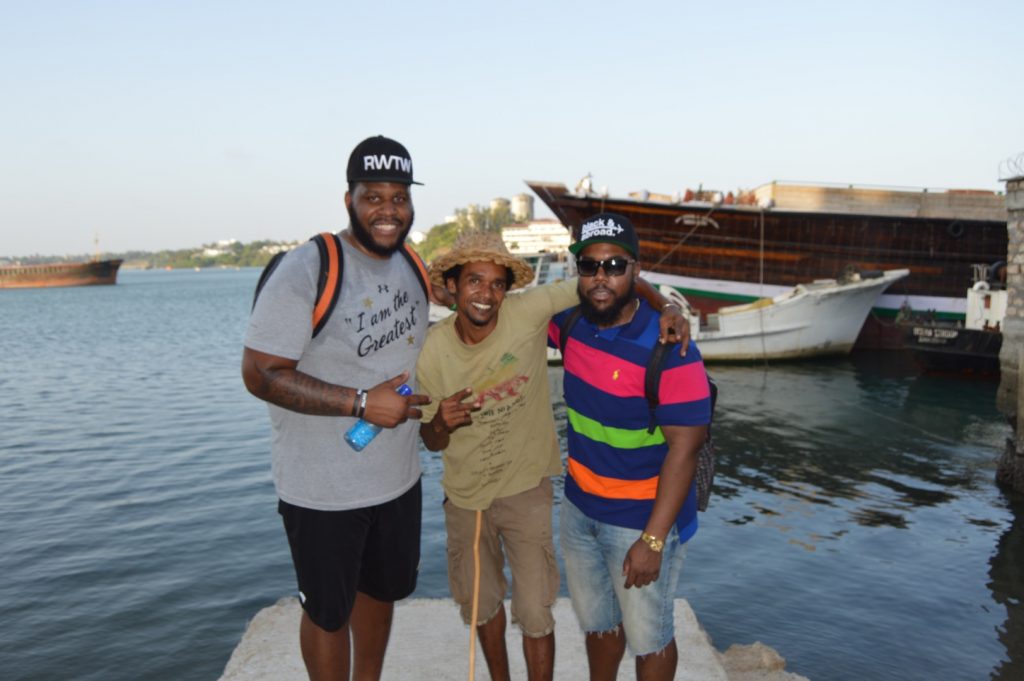 Mike and I with Modi 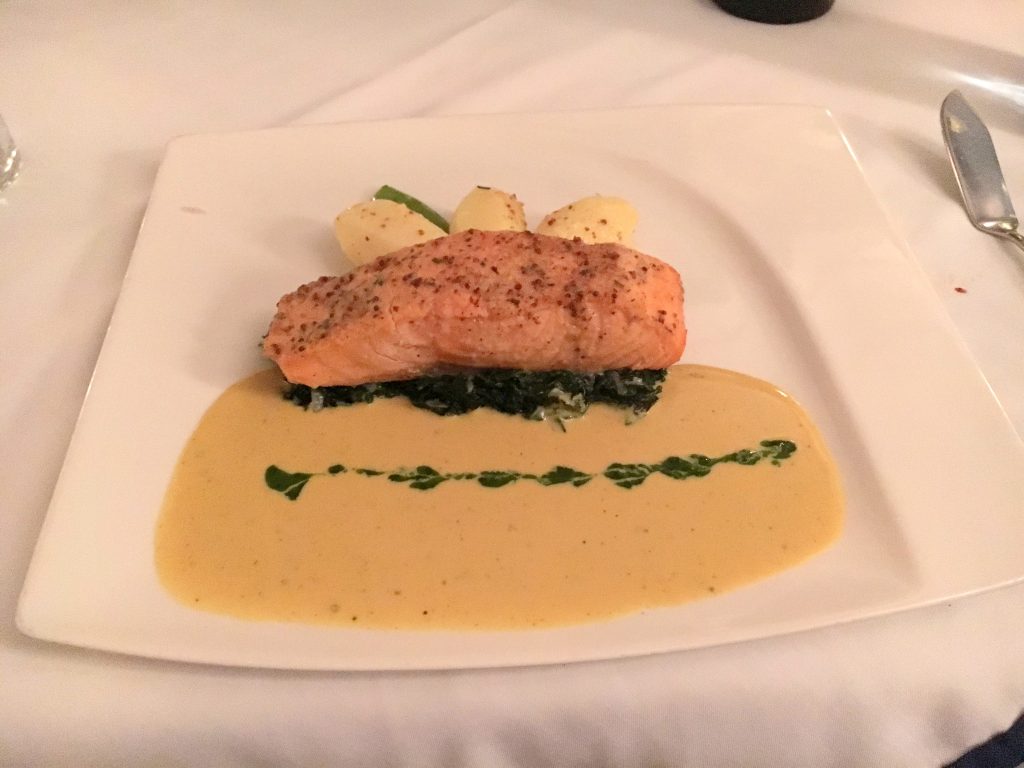 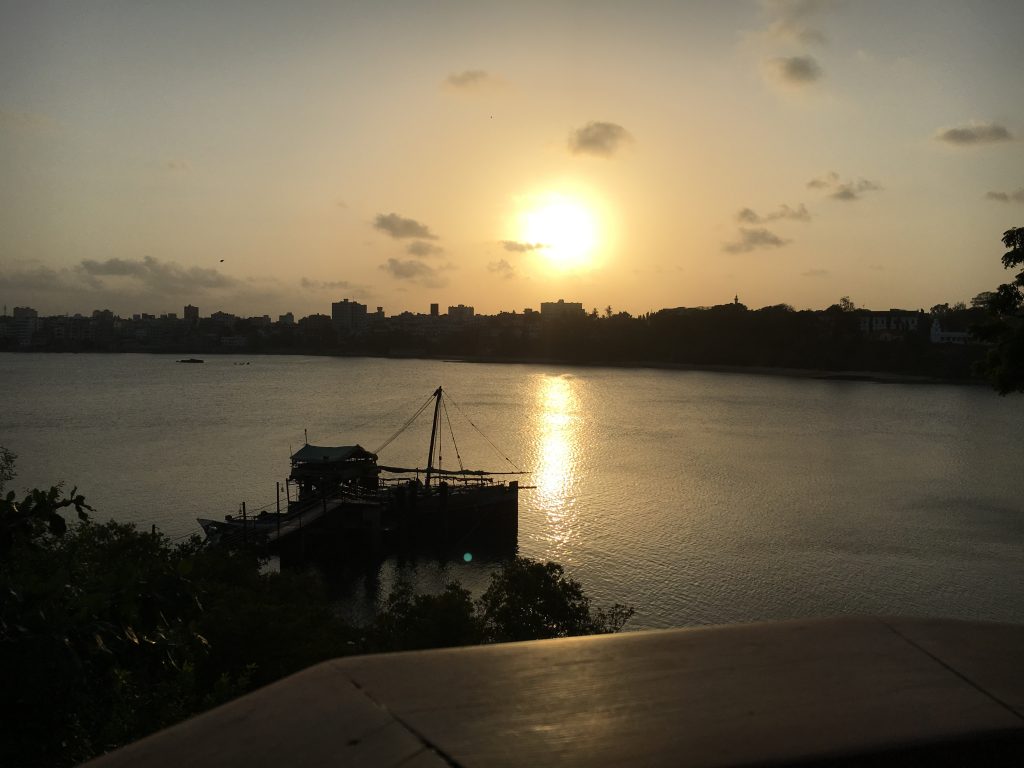 We spent the remainder of the evening enjoying drinks and shisha until I somehow managed yet again to fall asleep at the table. Seriously, I might have a slight case of narcolepsy here. We then returned to our host house and took it down.

After waking up refreshed and revived, we got dressed and called our driver Abel from the previous evening (You didn’t think we were calling Frank did you!?) to take us to the North coast for a day on the beach. I would say the ride was a little over an hour as we also had to take a ferry before eventually driving towards the resort areas.

We arrived at The Swahili Beach Resort ate lunch and spent the rest of the day relaxing, enjoying the views and experiencing a part of Africa I had never been shown in textbooks during my days in school. 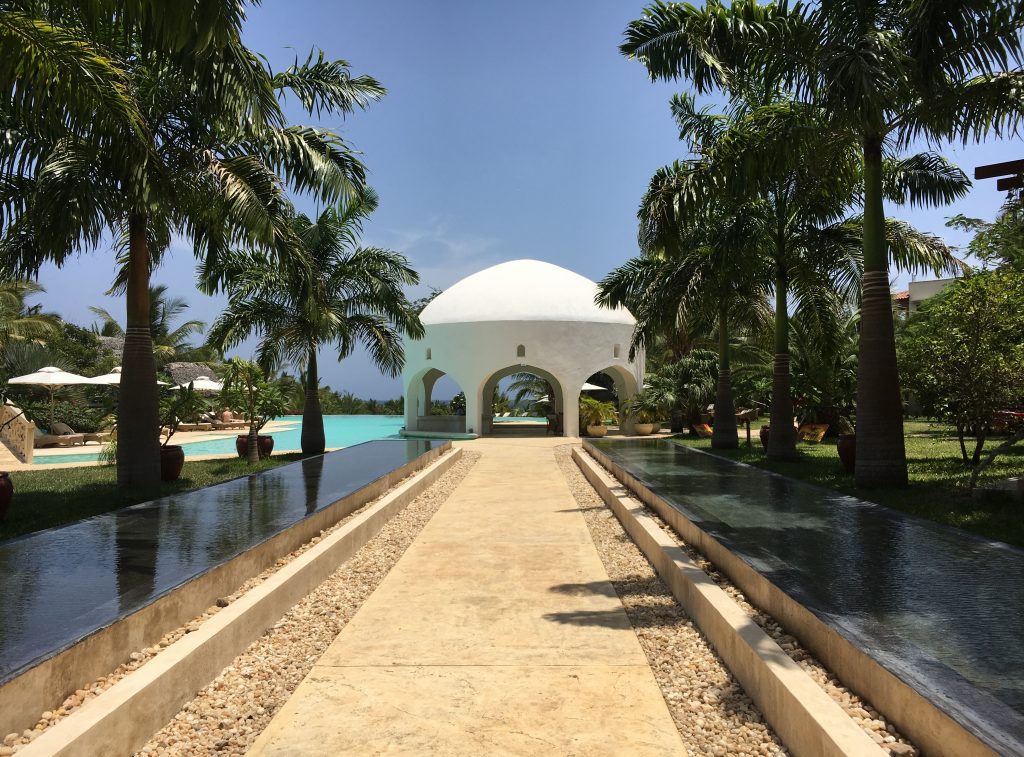 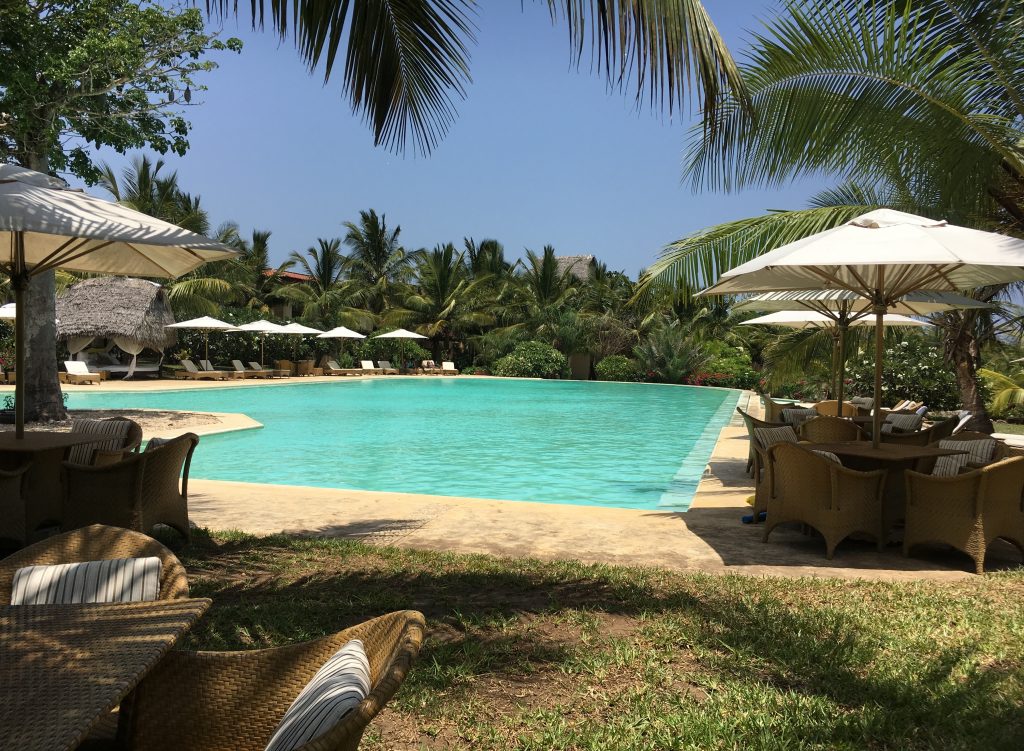 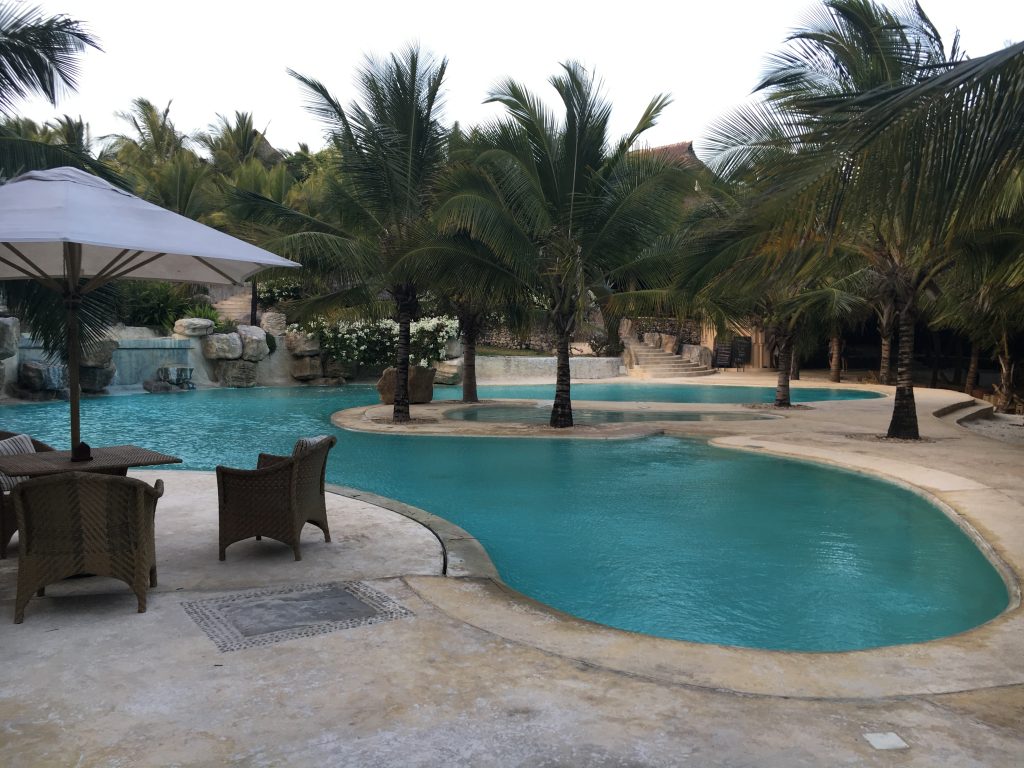 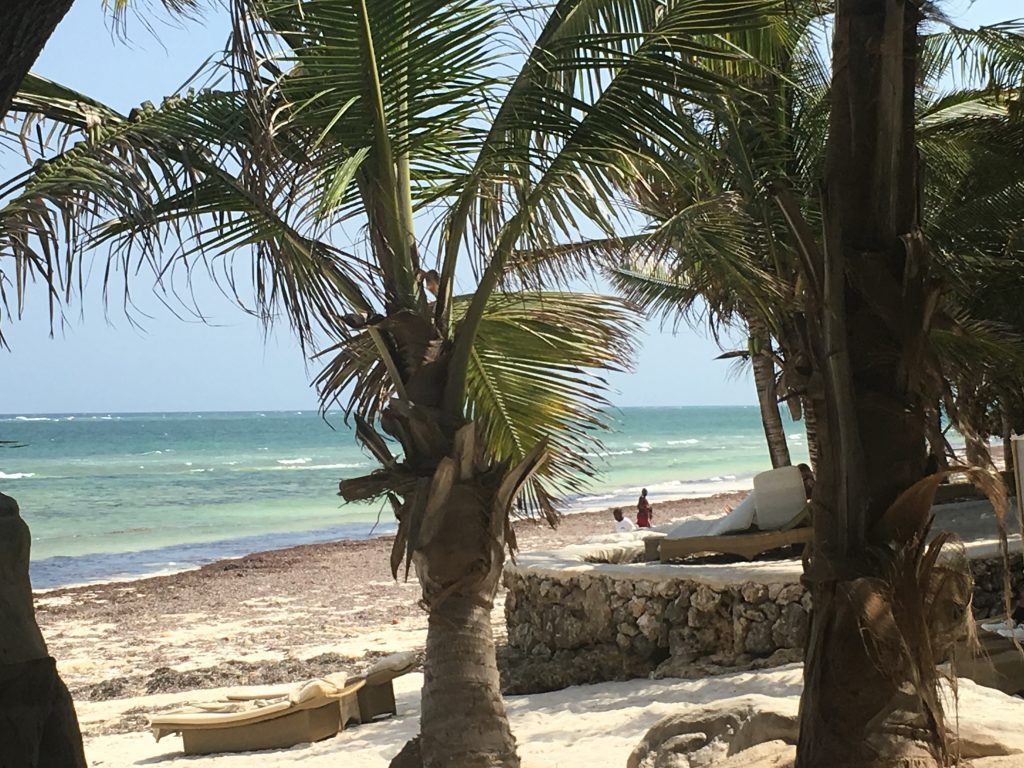 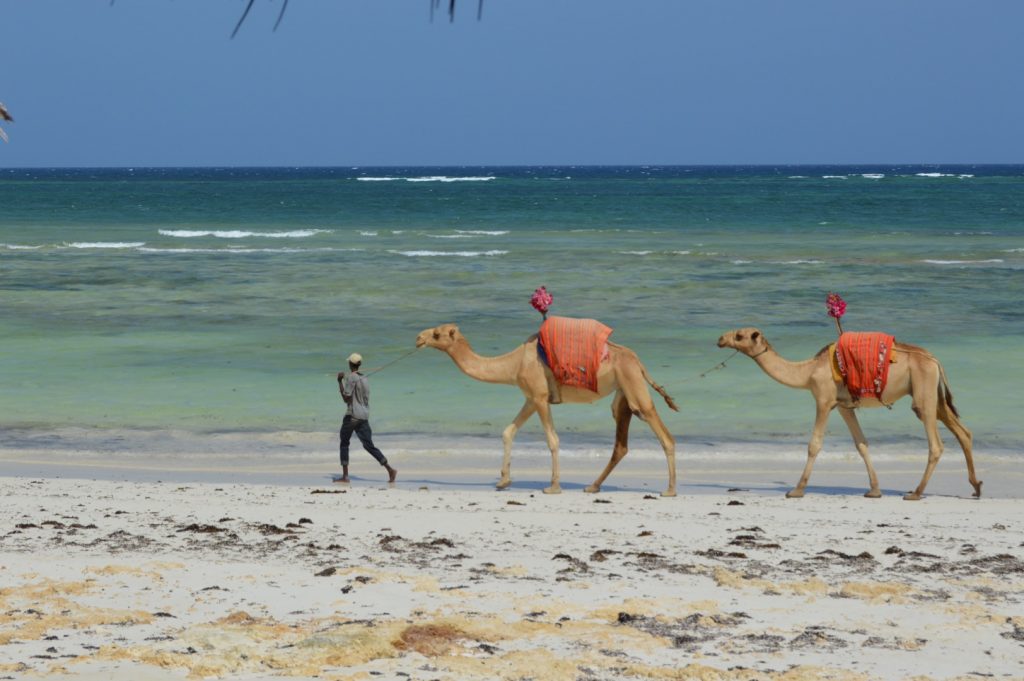 As the evening approached we left, headed back and packed our bags for an early morning flight back to Nairobi to begin our long journey back home.

Overall, Mombasa was very enjoyable and and a change of pace from Nairobi. I wish I had a little more time just to stay at the house we rented and do nothing but unwind. Frank wasn’t much of a bad guy either, though he may want to spend a few Saturdays in Drivers Improvement Classes.

Heading to Mombasa or thinking about visiting in the future? Check out Sincerelycrys.com and read Crystal’s 7 Unforgettable Moments from her trip to Mombasa! 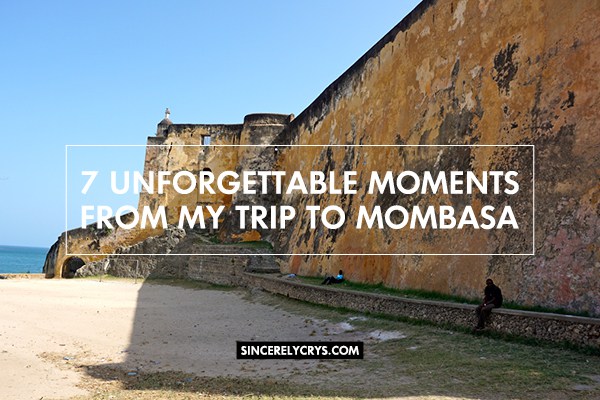